Rich Me, Poor Me

I received a surprise gift from a Japanese friend yesterday. One hundred billion dollars, Zimbabwe Dollars. It's value today is USD27.4-million, or PhP12.8-billion, or JPY25-billion. I had to count how many zeros there are.

All the while I thought I became instantly rich. So, I made a little research on the Zimbabwean Dollars. Here is what I learned.

With the money that I have, I can purchase three raw eggs in Zimbabwe. That is right, only three. If we complain of 10-30% inflation rate, what can you say about Zimbabwe? The conservative report of the government is pegged at 231,000,000% hyperinflation rate. Other sources, like Forbes Asia and Hanke Hyperinflation Index for Zimbabwe, say it is between 89.7 × 1021% and 6.5 × 10108%. The superscript denotes the number of zeros that follow.

According to a friend who worked there for two years, the prices of commodities swell three times a day, sometimes every two hours. Meaning to say, a loaf of bread is cheaper now than later. Maybe an exaggeration, one needs a wheel-borrow to carry money to purchase commodities. Therefore, there are no pickpockets to speak of. It is futile to rob someone else's money. Instead some people steal goods like mobile phones.

If you look closely to the photos below, this is not exactly money. It is a bank note. There is a period of time when it can be legally used. After the expiration date, it is deemed worthless. My bank note was issued on 1 July 2008 and expired on 31 December 2008. 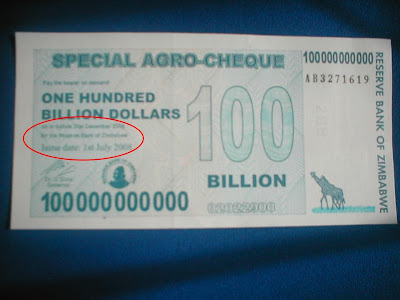 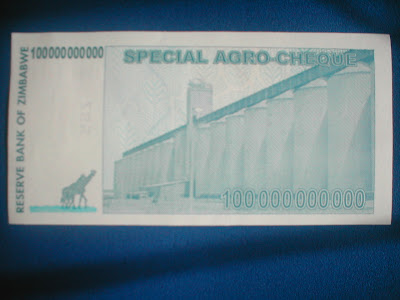