With China's boom, is the curtain finally closing down for Japan?

It's in the news. With Japan's low birth rate, declining population, and tight immigration procedures, China has officially emerged as the new second most powerful economy in the world in the second quarter of 2010. With it's expanding businesses, military, and out-of-the-box ways of doing things, China may soon become the next economic superpower in less than a decade, analysts say. Hey, don't forget India. Is the world ready? 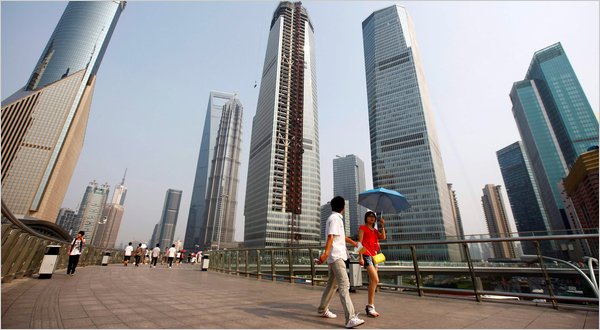 Aly Song/Reuters
The Lujiazui Financial Area in Shanghai. China has begun to reshape the way the global economy functions.
SHANGHAI — After three decades of spectacular growth, China passed Japan in the second quarter to become the world’s second-largest economy behind the United States, according to government figures released early Monday.
The milestone, though anticipated for some time, is the most striking evidence yet that China’s ascendance is for real and that the rest of the world will have to reckon with a new economic superpower.


The recognition came early Monday, when Tokyo said that Japan’s economy was valued at about $1.28 trillion in the second quarter, slightly below China’s $1.33 trillion. Japan’s economy grew 0.4 percent in the quarter, Tokyo said, substantially less than forecast. That weakness suggests that China’s economy will race past Japan’s for the full year.
Experts say unseating Japan — and in recent years passing Germany, France and Great Britain — underscores China’s growing clout and bolsters forecasts that China will pass the United States as the world’s biggest economy as early as 2030. America’s gross domestic product was about $14 trillion in 2009.
“This has enormous significance,” said Nicholas R. Lardy, an economist at the Peterson Institute for International Economics. “It reconfirms what’s been happening for the better part of a decade: China has been eclipsing Japan economically. For everyone in China’s region, they’re now the biggest trading partner rather than the U.S. or Japan.”
For Japan, whose economy has been stagnating for more than a decade, the figures reflect a decline in economic and political power. Japan has had the world’s second-largest economy for much of the last four decades, according to the World Bank. And during the 1980s, there was even talk about Japan’s economy some day overtaking that of the United States.
But while Japan’s economy is mature and its population quickly aging, China is in the throes of urbanization and is far from developed, analysts say, meaning it has a much lower standard of living, as well as a lot more room to grow. Just five years ago, China’s gross domestic product was about $2.3 trillion, about half of Japan’s.


This country has roughly the same land mass as the United States, but it is burdened with a fifth of the world’s population and insufficient resources.
Its per capita income is more on a par with those of impoverished nations like Algeria, El Salvador and Albania — which, along with China, are close to $3,600 — than that of the United States, where it is about $46,000.


Yet there is little disputing that under the direction of the Communist Party, China has begun to reshape the way the global economy functions by virtue of its growing dominance of trade, its huge hoard of foreign exchange reserves and United States government debt and its voracious appetite for oil, coal, iron ore and other natural resources.


China is already a major driver of global growth. The country’s leaders have grown more confident on the international stage and have begun to assert greater influence in Asia, Africa and Latin America, with things like special trade agreements and multibillion dollar resource deals.
“They’re exerting a lot of influence on the global economy and becoming dominant in Asia,” said Eswar S. Prasad, a professor of trade policy at Cornell and former head of the International Monetary Fund’s China division. “A lot of other economies in the region are essentially riding on China’s coat tails, and this is remarkable for an economy with a low per capita income.”
In Japan, the mood was one of resignation. Though increasingly eclipsed by Beijing on the world stage, Japan has benefited from a booming China, initially by businesses moving production there to take advantage of lower wages and, as local incomes have risen, by tapping a large and increasingly lucrative market for Japanese goods.


Beijing is also beginning to shape global dialogues on a range of issues, analysts said; for instance, last year it asserted that the dollar must be phased out as the world’s primary reserve currency.
And while the United States and the European Union are struggling to grow in the wake of the worst economic crisis in decades, China has continued to climb up the economic league tables by investing heavily in infrastructure and backing a $586 billion stimulus plan.
This year, although growth has begun to moderate a bit, China’s economy is forecast to expand about 10 percent — continuing a remarkable three-decade streak of double-digit growth.
“This is just the beginning,” said Wang Tao, an economist at UBS in Beijing. “China is still a developing country. So it has a lot of room to grow. And China has the biggest impact on commodity prices — in Russia, India, Australia and Latin America.”
There are huge challenges ahead, though. Economists say that China’s economy is too heavily dependent on exports and investment and that it needs to encourage greater domestic consumption — something China has struggled to do.
The country’s largely state-run banks have recently been criticized for lending far too aggressively in the last year while shifting some loans off their balance sheet to disguise lending and evade rules meant to curtail lending growth.
China is also locked in a fierce debate over its currency policy, with the United States, European Union and others accusing Beijing of keeping the Chinese currency,the renminbi, artificially low to bolster exports — leading to huge trade surpluses for China but major bilateral trade deficits for the United States and the European Union. China says that its currency is not substantially undervalued and that it is moving ahead with currency reform.
Regardless, China’s rapid growth suggests that it will continue to compete fiercely with the United States and Europe for natural resources but also offer big opportunities for companies eager to tap its market.


Although its economy is still only one-third the size of the American economy, China passed the United States last year to become the world’s largest market for passenger vehicles. China also passed Germany last year to become the world’s biggest exporter.
Global companies like Caterpillar, General Electric, General Motors and Siemens — as well as scores of others — are making a more aggressive push into China, in some cases moving research and development centers here.


Some analysts, though, say that while China is eager to assert itself as a financial and economic power — and to push its state companies to “go global” — it is reluctant to play a greater role in the debate over climate change or how to slow the growth of greenhouse gases.
China passed the United States in 2006 to become the world’s largest emitter of greenhouse gases, which scientists link to global warming. But China also has an ambitious program to cut the energy it uses for each unit of economic output by 20 percent by the end of 2010, compared to 2006.
Assessing what China’s newfound clout means, though, is complicated. While the country is still relatively poor per capita, it has an authoritarian government that is capable of taking decisive action — to stimulate the economy, build new projects and invest in specific industries.
That, Mr. Lardy at the Peterson Institute said, gives the country unusual power. “China is already the primary determiner of the price of virtually every major commodity,” he said. “And the Chinese government can be much more decisive in allocating resources in a way that other governments of this level of per capita income cannot.”
Hiroko Tabuchi contributed from Tokyo.
Source: http://www.nytimes.com/2010/08/16/business/global/16yuan.html?_r=1