Thinking Out of the Box 23

A Closer Look at Typhoon Ketsana

It has almost been two weeks since typhoon Ondoy wiped out many areas in the Island of Luzon particularly the National Capital Region (NCR). According to the Philippine Atmospheric, Geophysical and Astronomical Services Administration (PAGASA), the total rainfall between 8:00 and 14:00 on 26 Sept 2009, surpassed the highest 24-hour rainfall that the weather bureau recorded since 1967. With almost 4-million people affected by the storm, several thousands were left homeless, hundreds of people died, and many are still missing. Aid in the form of Bayanihan, food relief, monetary aid, and prayers started to pour to the Philippines. Once more, the good side of the Filipinos shine on.
Surpassing the speed of newspapers, radios, and televisions, the wide availability of information through the Internet, snap shots in various websites, videos in YouTube, testimonials in Twitter, Facebook, and blogs, one can feel the devastation from all over the globe, and the efects of which can magnify one's emotions and feelings.

With these, I could not help but review the history of the most destructive weather disturbances that happened in the country. I wanted to know if typhoon Ketsana was the worst typhoon ever to hit the country. I am not a weather specialist, but let us see what the numbers are saying.
Table 1 (see below) shows that the deadliest storm ever to hit the Philippines was typhoon Thelma (1991) that caused the lives of 5,000-8,000 people in Southern Leyte. On the other hand, among the other nine most destructive storms that we had so far, typhoon Babs (1998) was the least destructive with 303 deaths. This is more than the NDCC's 295 deaths caused by typhoon Ketsana (2009).
Tables 1 and 2 show that typhoon Ketsana was pegged at USD101.87 million as of 29 Sept 2009. Other sources valued it at USD321.3 million, however. On the other hand , the cost of typhoons Thelma and Babs were valued at USD30 million and USD185 million, respectively. Typhoon Joan (1970) is the second most expensive at USD416.6 million.
Table 2 shows that typhoons Mike (1990) and Agnes (1984) had the fastest 10-minute sustainable winds at 185 kph. Typhoon Mike had the fastest 1-min wind speed at 285 kph. In contrast, typhoon Thelma had the slowest 10- and 5-minute wind speeds at 75 and 85 kph, respectively. Typhoon Ketsana, on the other hand, had 140 and 165 kph 10- and 5-minute wind speeds, respectively.
As shown in Table 3, in terms of precipitation, or the quantity of water falling in a specific area within a specific period, the July 1911 cyclone proved to be the worst at 1,168 mm while the typhoon Wayne (1986) had the least amount of precipitation at 523.5 mm. Typhoon Ketsana bested at 341 mm.
What do these numbers mean?
The numbers indicate that typhoon Ketsana is the one of the worst weather disturbances to hit the Philippines in terms of damages and losses but not due to deaths. Understandably, it could probably be secondary to the destruction it created to the NCR, supposedly the most economically-productive area. The great and rapid floods that was experienced could be due to factors independent of rainfall. Most likely, it was the result of clogged drainage systems, land erosion, deforestation, and rapid urbanization. It seems that the destructive effects of typhoon Ketsana was more of man-made faults rather than the fury of nature.
An interesting finding is that a review of the PAGASA website did not show any severe typhoon disturbance in 1967. However, in May 1966, typhoon Klaring resulted to only 82 deaths with PhP120 million losses, and was not ranked as one of the deadliest typhoons. It is possible that not all data are available in the weather bureau's website.
The importance of accurate record-keeping that has been the arguments in the previous blog entries such as NDCC Figures: Parts 1 and 2, could not be more than emphasized. Accurate reports leads to better analysis, interpretation, and conclusion.
One important implication of the finding is the declaration of the entire country under the state of calamity for an extended period of time. Was it warranted? Was it done in haste? Well, that is not the scope of this report. I will leave the action to the policy-makers. Your guess is as good as mine.
You might want to read these:
NDCC Figures: Fact or Fiction? Part 1
NDCC Figures: Fact or Fiction? Part 2 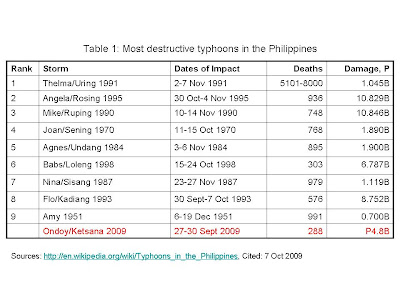 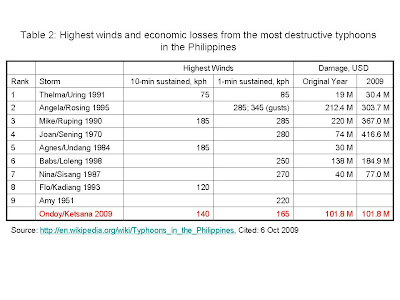 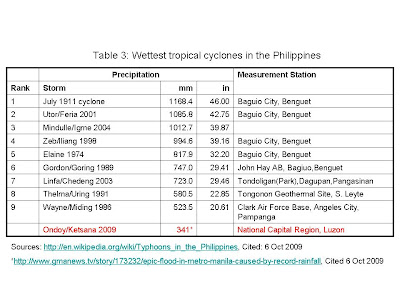 Categories: Current Affairs, People, Thinking Out of the Box, Weblogs